As printed in the Chillicothe Gazette – Originally published April 23, 2006

While Chillicothe Police Officer Larry R. Cox died one year ago, his legacy lives on through the World Wide Web.

More than 200 different sites list Cox’s name on them -most of them dedicated to the late officer’s death on April 21, 2005.

One of the most compelling sites devoted to Cox is the Officer Down Memorial Page. Cox’s page includes “reflections” left by friends and others who want to honor Cox’s memory – and was up to 11 pages of recollections as of Monday.

In particular, one friend leaves a “reflection” quite regularly, signing her name only as “Heather.”

She has posted recollections at least once per month since Cox’s page was started April 24, 2005.

Many of the recollections on the page come from law enforcement officers and their families. They send condolences and other messages of love and support from as far away as British Columbia.

Chris Cosgriff, chairman of the Officer Down Memorial Page Inc., said the number of pages for Cox is about average for an officer killed in the line of duty.

Cosgriff – who lives in Oakton, Va. – created the page in 1996 after he was outraged by a Washington Poststory which he felt glorified “a person who had murdered two police officers” in his area. He wanted to set up a way to honor the officers and others as well.

The site, now a nonprofit organization, received help from the National Law Enforcement Officer’s Memorial Fund to gain access to the information to make the tributes.

As of Tuesday, more than 18,000 officers have been honored on the site.

The section – filled with archived stories, photos and recollections sent to the paper by readers -has been updated to reflect the past year’s stories, among other things.

“It’s amazing,” said Throne. “It’s a tribute to his legacy that people from all over the country and the world still want to read his story and things about him.”

One of the most interesting pages is one operated by a San Antonio, Texas, jewelry shop that sells sterling silver replicas of badge pendants.

David Putnam, of Alamo City Gold and SA Diamonds, said the business does the badge free of charge for the wife, child, mother or father of any officer who dies in the line of duty.

“I duplicate the badge down to the smallest detail and put their name either on front or back and their (end of watch) date,” Putnam, a retired police detective, said.

Putnam said his business did badge pendants for the families of all 73 officers who died in the Sept. 11 attacks at the World Trade Center.

SA Diamonds also features badges of other Chillicothe police officers, past and present.’

While there are several good sites devoted to Cox, there are some negatives to them.

The good and bad

One site, policespecial.com, has a good tribute to Cox, but includes a misleading photo used in the early investigation of Cox’s death. Diallo Hill, a “person of interest” in the investigation, is identified as a “Cop Killer” even though Hill never was charged in Cox’s death.

Cox also has an entry on findagrave.com, but the entry – posted by an unknown person – just has a picture of the entrance to Greenlawn Cemetery where Cox is buried, not his actual grave.

Some of the Web site pages dedicated to the memory of Officer Larry R. Cox:

Officer Down page for Cox

Angles in the Alamo » 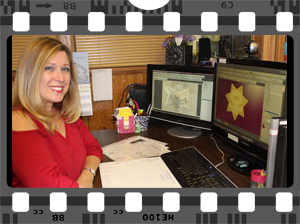 Checkout the process in how we design and make our jewelry!

One of our associates will contact you with the requested information during business hours M-F 10am – 6pm CST.

No matter what size badge or karat metal you order

Use your old gold to create a new badge!

We can use items you no longer wear (necklaces, earrings, rings etc.) to melt and create your badge pendant jewelry or other piece of custom jewelry. Just mail us the gold via USPS insured for the approximate value. We will only charge you a “cast charge” that includes the wax cutting, casting and refining, polishing and bail.

In order to use your gold, we need enough grams to match your badge pendant order and a base cast weight total. Usually 7-12 grams is needed to cast an average 1″ badge pendant.  If you do not send enough gold to cover the cast weight, there will be an additional charge for the extra gold required.

If you send more gold than is needed, we can either return the additional gold to you or credit your order with the difference.

Contact us for questions of any kind regarding these custom one of a kind handcrafted pieces!

You may request that your badge be fully inked or partially inked. Also, we are happy to provide your badge without any ink at all should you prefer that customization. 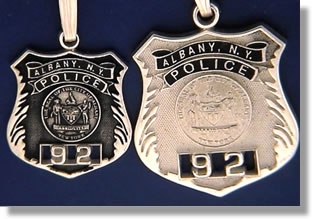 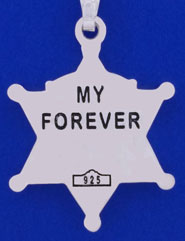 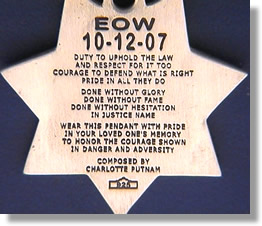 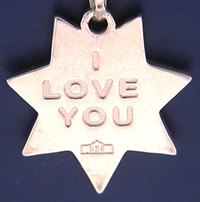 One of our associates will contact you with the requested information during business hours M-F 10am – 6pm CST.